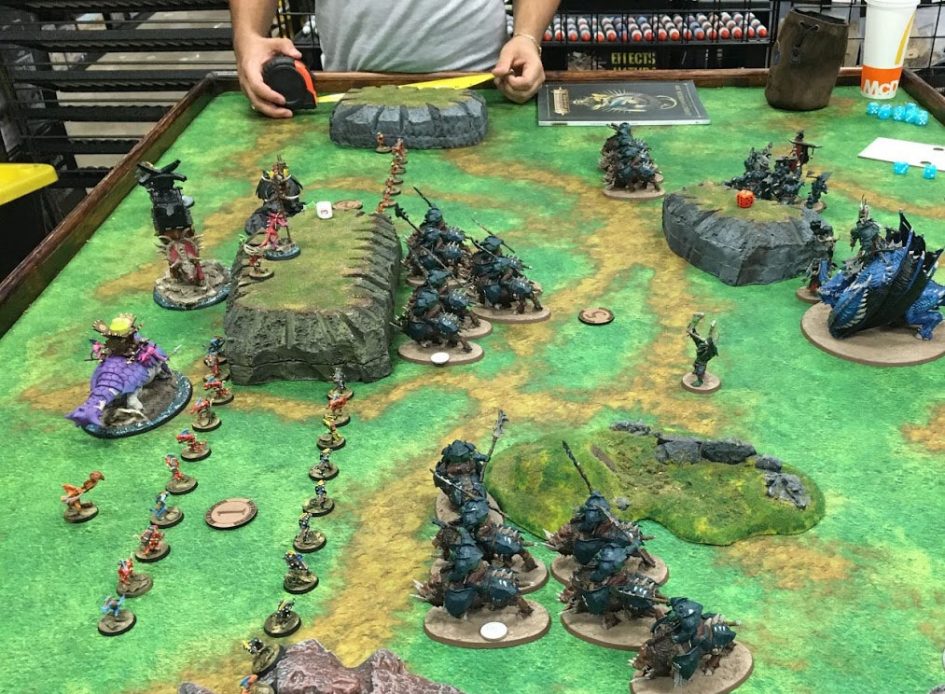 I hope you’re staying at home, washing your hands, and taking care of things. I also bet you’re going just a little stir-crazy at the prospect of social distancing for who knows how long. Sure, you could paint that second army that you’ve been working on, but you still haven’t finished your first! Shame on you.

Since we’re all stuck around the house, that pile of shame is sitting next to you. It’s staring at you, a mountain of grey or primed plastic. Why not spend some time considering the strategy of that unpainted army instead of what colors you’re going to base-coat with.

I’ve always heard that AoS is a game of movement. I like to think that I’ve done a decent job of considering my moves during the game, but there’s one thing that I’ve been less considerate of when playing AoS: deployment. It may just be the first move of the game, but it’s also your “make or break” moment of choice  depending on the game’s battleplan.

Take the battleplan Focal Points, for example. 5 objectives with a pretty interesting mechanic for victory points. Yes, the middle point is valuable, but denying your opponent matching objectives is crucial. Blocking on one side allows you to fight harder for that middle objective, though the points are the same: 2 points for middle vs 2 points for the side, blocking the bottom right objective by strategically placing units between it and the top right allow you to control the push into the middle objective.

So, since you’re at home, likely without an opponent to play against, how can you practice some set- ups and deployments?

It’s a valuable tool co-created by the creator of AoS Reminders, Davis Ford. It allows you to choose from multiple Battle Plans and deploy your forces. It can show you objective capture aura, you can have an aura for your army’s abilities, and you can maneuver things around.

How would you set up against this?

Well, you can see that I’m planning on pushing for that top objective pretty hard, but where does that leave me for the other two? I can hold them, somewhat, but my Skarbrand and one of my Bloodthirsters are pretty committed to the top objective. How about your army? Can you counter-charge? How would you do it?

These questions are very important to consider when placing your army and determining who gets first turn (if you’ve got the choice!). Using AoS Battle Plans is a great way to try out different deployments. You can even save them for live reference.

At the end of the day we all play to enjoy the game, but a little time prepping during this downtime could allow you to become an even better player. Practicing deployments allows your tournament games to speed up, gives you the room to focus on other parts of your game, and gives your opponent a better experience over all.